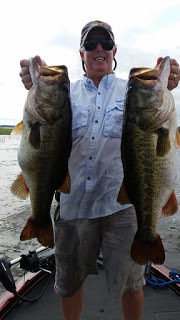 Captain Jamie Jackson has been a shiner fishing guide on Lake Toho for over 35 years. Called the “Shiner fishing phenom” by the great people over at In-Fisherman, Jackson has perfected the art of bass fishing with shiners. In this article, we will go over all of his bass fishing tips and secrets. In the previous article we talked about how effective shiners are and how they can help you become a better artificial angler, if you have not read it I’ll provide a link to it here.

To begin with we’ll start with his tackle. While shiner fishing can be utilized on nearly any rod and reel, Captain Jackson prefers to use the heaviest tackle he can get away with. He uses a 7’6″ heavy 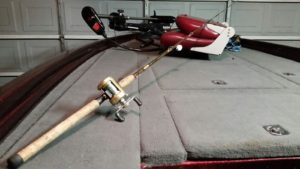 action, Avid Inshore, St. Croix. Paired with a Shimano Calcutta with 50 pound Power Pro Max Cuatro braid. This set-up could hoist big Tarpon in the ocean but Jackson uses it to hoist in giant Florida bass out of the heavy vegetation. With the no stretch braid and heavy action rod the hook is driven perfectly into the fish on every hook-set. He ties a palomar knot to a 4/0 Mustad O’shaughnessy hook with a white bottom and red top foam bobber. He says he’s used all the different bobbers from cork to plastic but he finds the white and red foam ones to be the least visible to the fish. With this set up he says “Anyone can pull these giant shiner slob bass to the boat”.

Where to fish shiners? Well that just depends on where you want to fish. Shiners can be fished nearly anywhere from deep holes and ledges, to shallow flats and grass beds. Jackson changes up where he fishes based on the seasonal patterns. The basic explanation is in summer and winter fish deeper and in spring and fall fish shallower. When the fish are deeper and you need to get the shiners down, peg a slip sinker up your line to the desired depth that you’d like your shiner to be, much like a Carolina rig. The same can be done with a drop shot rig but Jackson prefers the Carolina set up because it gives the shiner more freedom to move.

When fishing heavy grass Jackson places a bobber about 3 to 4 feet up his line depending on the depth he is trying to reach. The bobber helps keep the shiner from digging down into the grass and keeps him swimming around and “advertising” himself to the bass Jackson says. Bass also like to feed up so always try to keep your shiner positioned above where you believe the bass are staging. When fishing sparser vegetation and open water that isn’t deep he’ll simply just free line the shiner with nothing on the line but a hook.

When Jackson is picking his shiners he says he always goes for the wild caught ones as apposed to domestic breed ones. Wild shiners know to fear bass and will try to escape which drive the bass to attack, while domestic ones will just swim along unaware of the bass stalking them. Domestic shiners still catch bass but not nearly as many as wild ones. When hooking the shiners Jackson always prefers to go through the bottom of the lip and through the top of the nose. He says the hook up percentage is almost always better that way, but if the bass are mouthing the shiners (grabbing the shiner and holding it in there lips instead of in there mouths) then he’ll switch and hook them through the back. He’ll also hook them in the back when he wants the shiner to swim up more near the top, when the bass are feeding more on top.

Hooking them in the lips causes the shiner to stay down and hooking them in the back cause them to swim up. Another quick tip Jackson says is to keep your shiners moving, if your shiner quits moving for a couple of minutes give it a small twitch of your rod to get it on the move again. Always keep your shiners “Advertising” and when a bass grabs a shiner give him a few seconds to run with it and get it positioned in his mouth then reel up the line and set the hook!

Now here’s the big secret that Captain Jamie Jackson has kept. When the bass are being finicky in shallower water. Jackson will take a Lindy Worm Blower that is typically used to add air to worms and make them float, and he’ll stick it in a shiner and add air to it. This basically turns the shiner into a top water live-bait. The shiner will float and flutter around the surface and this can drive bass crazy! Fish that wouldn’t bite before will suddenly start nailing your baits, and sometimes it can save your day on the water.

Captain Jamie Jackson is perhaps the greatest shiner fisherman ever, he has caught countless big fish, and I hope that the techniques that he’s learned over the years help you catch more big ones too.

One thought on “Shiner Fishing Techniques from the Master Himself”